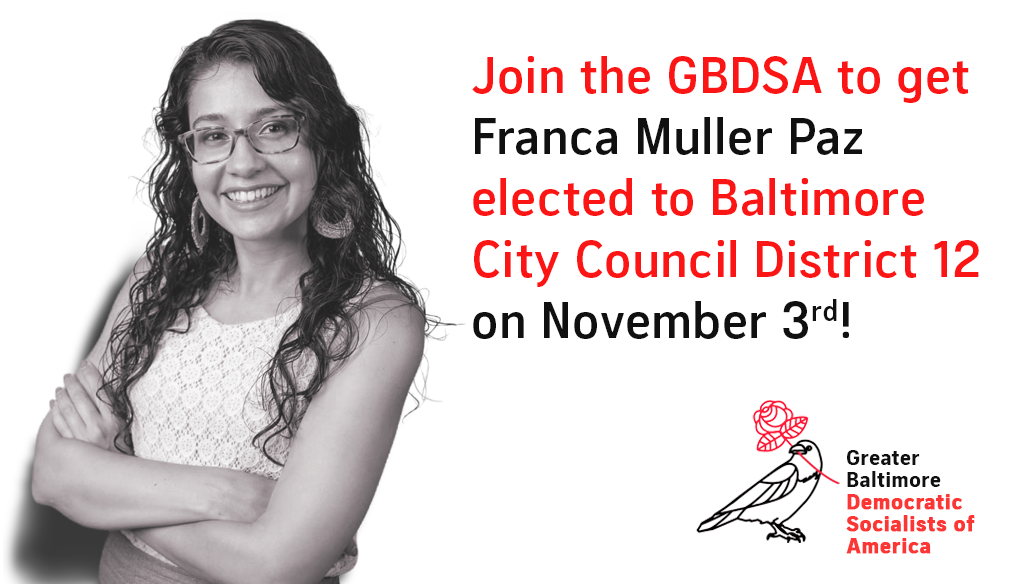 The Greater Baltimore Democratic Socialists of America are proud to endorse Franca Muller Paz to represent District 12 in the Baltimore City Council!

We need your help to elect a fellow GBDSA member, award-winning teacher, and community organizer to public office. Our membership voted to endorse Franca and has committed to devote our time, energy, and resources to her campaign.

Please sign up here to get involved! Whether you live in District 12 or not, all are welcome to join in this effort, especially members who are new to our chapter.

In particular, we’re looking for volunteers to help out with these four teams:

The general election will be held on November 3, 2020, with early voting starting on October 22.

The District 12 seat is currently held by Robert Stokes, Sr., who won the general election in 2016 with 71% of the vote (8,113 votes). This March, Stokes won the 2020 Democratic primary election with 3,180 votes (40.4%). GBDSA endorsed one of his challengers, Dave Heilker in the primary election.

Robert Stokes benefits from name recognition (although it is purely coincidental). However, the incumbent is known more for being a strong supporter of the Mayor than accomplishing any sort of progressive political victory. He also has a reputation for skipping public events and being more accessible to developers than his constituents.

A victory in District 12 would shift the politics of the Baltimore City Council and provide our chapter with meaningful opportunities for base-building and political education in our efforts to abolish the BPD, build working class power, and continue the fight for racial and economic justice in the Greater Baltimore area.

Wondering which district you live in? You can look that up here. But remember, you don’t have to live in District 12, or even in Baltimore, to volunteer.

Why We Endorse Franca Muller Paz

Franca has an impressive history of activism, organizing, and coalition-building that aligns closely with the platform and mission of GBDSA.

First, Franca is a Baltimore City school teacher who has served three terms as an elected representative of the Baltimore Teachers Union. She has organized her students through youth-led movements such as SOMOS (Students Organizing a Multicultural Open Society) and won meaningful victories in the effort to close the digital divide for students during the COVID-19 crisis, to cite just one example.

Franca also has connections to many other grassroots organizing groups throughout the Baltimore area including CASA de Maryland, the Baltimore Bern Unit, Unidos Con Bernie, and GBDSA, to name a few. She is working with existing mutual aid networks to build capacity and connect District 12 residents to resources throughout the course of her campaign. Rather than waiting until she takes office, she is immediately taking action to bring relief to people who have been impacted by the COVID-19 pandemic, especially Black, Latinx, low-income and working-class residents who have been disproportionately harmed. If she wins, Franca plans to continue to fight for more resources to combat the COVID-19 crisis and to transform her campaign structure into a summer job program for youth.

Franca’s stances on the issues closely align with the official GBDSA Platform.

To highlight just a few examples, Franca stands with GBDSA on the planks outlined below.

Abolish the BPD
Because Franca is committed to defunding the BPD, and broader abolitionist politics, her campaign represents a strategic opportunity for our Defund BPD campaign. A victory in District 12 would shift the politics of the city council, and the campaign provides GBDSA an opportunity to do base-building and political education around these issues.
Workers’ Rights
Franca has also demonstrated a commitment to building the political power of working-class communities. She is committed to fighting for workers, raising the city’s minimum wage, and supporting unionization struggles. Her campaign rejects corporate donations and is led by students, organizers, and community leaders.
Safe and Dignified Housing
Franca is committed to fighting for housing support for all Baltimoreans, including those who experience homelessness and housing insecurity, through universal rent control, city-wide tenant unions, and seizure and redistribution of vacant housing to community controlled institutions like community land trusts.
Free Public Transit and Red Line
Franca recognizes that our public transit is profoundly segregated and supports the GBDSA platform to work towards free public transit and the return of plans to implement the Red Line.
Direct Election of School Board Members
Franca stands with GBDSA in calling for a school board that is democratically elected by community stakeholders, including students, parents, teachers, social workers, and school support staff. As an education access advocate for immigrant students in Baltimore, she is also calling for REAL school choice, equitable school funding, and a commitment to recognizing that black lives matter in schools—in terms of hiring, curriculum, and anti-racism training for school staff.
Non-Cooperation with Immigration and Customs Enforcement (ICE)
Franca is fighting to maintain separation between ICE and the Baltimore Police Department and to fight back against any efforts to build adult or youth immigration detention facilities, or to have pre-existing facilities serve as detention centers. She is also pushing City Hall to provide translation service funding for all Baltimore City agencies, and plans to empower the Mayor’s Office of Immigrant Affairs Community Advisory Board to represent the diverse voices of immigrant communities from various ethnic, racial, and economic backgrounds.

We hope you’ll help us in our efforts to get Franca elected. Once again, you can click here to sign up to volunteer.